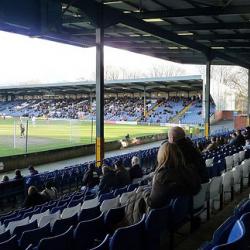 Bury FC have been placed under a transfer embargo by the Football League, but insist they are not in financial crisis.

The Shakers are unable to sign any new players after taking out an emergency loan with the PFA until mid-January.

Bury’s business manager David Manchester, however, is confident the club will pay back in full and on time.

“All businesses have cash flow problems and we are no different from the rest,” he told BBC Radio Manchester.

“December has traditionally not been a bright month for dating.

“Our presence on Saturday [against Leyton Orient] was just over 2,100 and we only have one home Championship game until January – December 21 against Shrewsbury Town.

The move has barred new signing Ben Parker – who struck a no-contract deal with the Shakers last week – from playing in Saturday’s loss to Leyton Orient.

Earlier today, a statement posted on the club’s website said: “Until the loan is paid off, the club has been placed under an embargo on the registration of new players.

“As we speak, we cannot register new players before January 1, 2013 under league rules, the embargo will extend this block on signing new players until this loan is fully repaid to the PFA.

“The board would like to assure all supporters that this is only a temporary problem.”

The club failed to pull revenue from tickets to their Football League Trophy North quarter-final after the match – which was due to be played at Gigg Lane last Tuesday – was postponed due to a pitch waterlogged.

However, they will not be forced to return to their parent clubs and will be eligible to play for the Shakers until their respective agreements expire.

Bury will travel to Southend tomorrow for his second round replay against the Shrimpers, after the game at Gigg Lane ended 1-1 nine days ago.

Image courtesy of YellowBook, with our thanks.